Lately I've been having a slight obsession with chicken sausage.  Linguine with chicken sausage and broccoli rabe is the way to go.  I'm finding the texture very satisfying.  Obviously, when you're pregnant you tend to get a lot of people that ask you, "what are your cravings?"

For me, my cravings have been changing quit often, but most recently, I might have to say that it has been chicken sausage.  I just found out last week that I'm having a boy 🙂  My husband, Eric, loves his meats (man food).  I have been saying that since I'm having a boy he must be taking after his father and that is why I've been craving sausage lately.  I figured instead of chowing down on regular sausage, I'd health it up a bit and go the chicken route.

Why chicken sausage over pork

Also, when you pair chicken sausage with broccoli rabe you are increasing your health benefits even more.  It is loaded with vitamins A, C, and K and also packs in minerals like calcium, folate, and iron.  Broccoli rabe is also filled with fiber, which is something I am trying to increase since I am 8 pregnant.

This specific meal gives you tonsssss of leftovers, which I live for during the week!  Also, I used whole wheat linguine instead of flour.  I'm all about the whole wheat.  Not only is it better for you, but it makes me not feel as guilty when I go for that second helping 😉 I also added some broccoli rabe because my husband loves it and I was try to incorporate some greens into this dish. Worked out perfectly!  If you don't have broccoli rabe, you can add any leafy greens you desire.  Try adding some spinach or kale.

Ingredients to make this meal

You will need 1 tsp kosher salt, 1 tsp. ground black pepper, 2 tbsp avocado oil, 8 ounces Italian chicken sausage, 1 onion, diced, 2 garlic cloves, minced, and 12 ounces of whole wheat linguine.  You will also need 1 bunch of broccoli rabe, stems trimmed and discarded and tops chopped up, but if you aren't a fan of broccoli rabe any leafy green will do.

I recommend trying spinach or kale and last, but not least you will need 1-ounce parmesan cheese, grated.  I boiled the linguine for this dish in a large pot, but I cooked the entire meal in a cast-iron skillet.

How to make this dish

First, bring a large pot of salted water to a boil.  Meanwhile, heat oil in a large cast iron skillet.  Remove sausage from casings and toss it into the skillet.  Cook until browned and in crumbles, breaking it up with a wooden spoon as it cooks.  Add the onion and garlic and cook until translucent.

Add the broccoli rabe, or leafy green of choice and season with salt and pepper and cook until wilted, about another 8 minutes stirring to combine.  Next, throw the linguine into the boiling water, stirring occasionally to prevent sticking, about another 8 min.  Then, add the cooked linguine to the sausage mixture and toss to combine.  Add half the cheese and stir.  Cook until the cheese is melted.  Divide the linguine mix evenly into serving bowls and top with desired amount of parmesan cheese 🙂 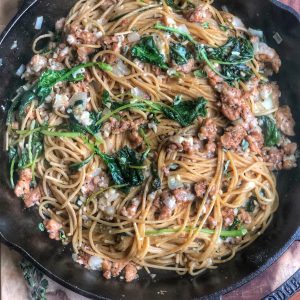 What can my kids do?  Help measure out ingredients and add to the cast iron skillet.
Tried this Recipe? Pin it for Later!Mention @JilliansHealthfulEats or tag #jillianshealthfuleats!
« Mushroom Burgers
Grilled Pesto Chicken Skewers »