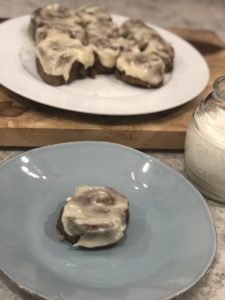 Say what?!!!! Healthy Slow-Cooker Cinnamon Rolls? Yup, at your service!  I don't think any amount of pictures will explain how tasty these treats are.   Slow cooker is the way to go!  I made these this past Sunday.  I wake up at the crack even on the weekends because that's just what happens when you have kids.  So , I started making these scrumptious tastes of heaven at like 7am and they were ready to go by 9, when my family was just about ready to start asking what was for breakfast.  This would also be perfect for a Mother's Day Brunch!

I am not a baker, like I've said in the past, so when I tell you that these were pretty easy to make, you have to believe me.  I have been trying to up my baking game, but I have had some fails along the way.  I'm going to keep trying, though, so I'm sure there will be other days where my kitchen looks like a bomb went off and Eric (my husband) wants to kills me 🙂

Your kids can even help you ice them because cinnamon rolls look better with messy icing anyways.  Also, like I've said in the past, if your child helps you make anything, they are more likely to want to eat it.  During the week I also try and eat much healthier than I do on the weekends.  I give myself more passes then I should when the day starts with an S 😉 So, I'm not gonna lie, the icing does have some sugar in it.  You could always substitute the sugar with pure maple syrup or honey or an even healthier version, but I was feeling the sugar this past weekend.

What do I need to make healthy cinnamon rolls?

*This post contains affiliate links.  As an Amazon affiliate I earn from qualifying purchases.

You will need 2 cups whole wheat flour, 1 ½ tsp. baking powder, 1 tsp. kosher salt, 6 tbsp. unsalted butter, cubed, ²⁄3 cup half and half ( I made my own - half light cream, half 2% milk), 5 tbsp. unsalted butter, softened, ¹⁄3 cup granulated sugar (powdered sugar), ¼ cup packed light brown sugar, 1 tbs. cornstarch, and 1 tbs. ground cinnamon.  If you want to cut corner and make this meal even healthier, I've linked to my homemade pizza dough recipe and you can make that the night before and then your dough is ready to use in the morning.  If you decide to make your dough with the pizza dough ingredients, then you won't need the baking powder, baking soda, or half and half.  Click here for link to homemade pizza dough!  Also, since this is a slow cooker meal, you obviously need a crock pot.  I have a family of 4, with one on the way.  My kids are all little so the smaller size crock pot has been useful in our family.  I've linked the one I have.  Cuisinart programmable slow cooker! 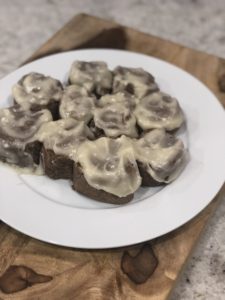 You will need 2 oz. softened cream cheese (reduced fat), 1 tbs. unsalted butter, softened, 1 tsp. pure vanilla extract, ½ cup of powdered sugar or ½ cup pure maple syrup.  If you use the powdered sugar you will need a few drops of milk, as needed.

How do you make these healthy slow-cooker cinnamon rolls?

First, line bottom of slow cooker with parchment paper, extending paper halfway up sides.  Next, to make the dough, in a food processor or blender add four, baking powder, salt, and baking soda.  Pulse to combine.  Pulse in the cubed butter and half and half.  Dump dough out onto a lightly floured surface.  Knead gently for 15 strokes or until smooth.  Roll dough out into a 15 x 10 inch. rectangle; spread with ¹⁄3 cup melted butter, brown sugar, and cinnamon.  Spread mixture onto dough with a brush.  Slice rectangle into ½ inch strips and roll each one up to form a bun.   Arrange rolls, cut side down, in prepared cooker.  Brush with more melted butter, brown sugar, and cinnamon combo.  Sprinkle with more cinnamon, if desired.  Cover and cook on high for 2 hours.  (Tops of rolls will be slightly wet).  If possible, remove the insert from the slow cooker.  Cool rolls, uncovered for 30 min.  Spread with cream cheese icing.

How do I make the cream cheese icing?

In a medium bowl, stir together cream cheese, butter, vanilla, and if choosing pure maple syrup, stir that in, as well.  If using powdered sugar, stir in sugar and drops of milk as needed.  Spread the cream cheese icing onto the buns!  Your children can help with this part because messy icing looks just as delicious! 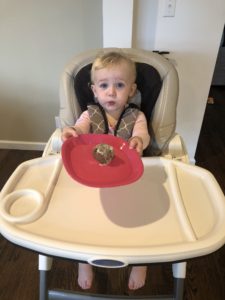 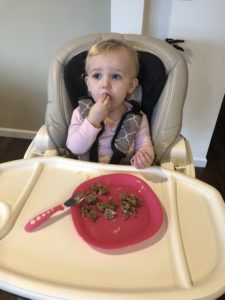 Taylor Marie enjoying some buns!  We got buns hun 🙂 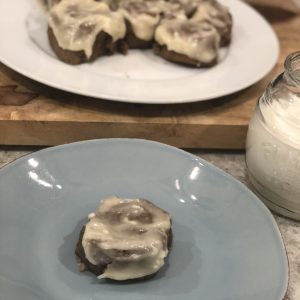 Store in an airtight container for up to 5 days!   What can my kids help with?  Measure out all ingredients and knead the dough!  That was my daughter's favorite part 🙂  Have them ice the buns!  The messier the icing the better!
Keyword Healthy Slow-Cooker Cinnamon Rolls
« Turkey Skillet Mac and Cheese!
Ground Turkey Meatballs and Zoodles »