First of all, anything Mexican I am a fan of and Chicken Fajitas is definitely one of them.  This is another meal I find helpful when mothering around :0  My new favorite term to use when you barely have enough time to eat, let alone cook a meal!  There are three ways that you can make the chicken for these fajitas.  One, boiling the chicken, then shredding it or you can grill it, then shred it.

My husband, Eric, happened to come home right before I started dinner so he offered to grill.  Otherwise, I was going to boil it OR my favorite and easiest way to make these is in the CROCKPOT!

Why use plain Greek yogurt as a substitute for sour cream

You can't have chicken fajitas without that sour cream taste to smear all over each piece.  When I first decided that I wanted to became a health nut I discovered that plain Greek yogurt tastes exactly like sour cream.  Eric even agrees and he is a hard one to convince with my healthy swaps.

Best condiments to eat with fajitas

You can't have fajitas without some chunky salsa to dip them in!

Plain Greek yogurt as a substitute for sour cream.

I definitely recommend investing in a panini press.  You'd be surprised how often you use it 🙂

How to make chicken fajitas in the crockpot

I will have to admit that since becoming a new mother of 3 I am loving the crockpot these days!  What beats throwing everything into one pot and setting it and forgetting it? Not much in my eyes 😉  So start off by setting the crockpot on high.  In the bottom of the crockpot, lay 1 lb of bonelss, skinless chicken breasts.

Top the chicken with 1 container (15.5 oz) of salsa, then 2 red bell peppers and 1 green bell pepper, cut into slices, and 1 medium sized onion, chopped into pieces. The on top of that add 1 tbsp of cumin, 1 tbsp of chili powder, 1 tsp of onion powder, 1 tsp of garlic powder, 1 tsp of oregano, 1 tsp of paprika, ¼ tsp of kosher salt, and ¼ tsp of ground black pepper.  Set it for either 8 hour on low or 4 hour on high.  Once cooked using 2 forks shred the chicken.  Voila!  Eat with whole wheat wraps and some plain greek yogurt and shredded cheese on top! 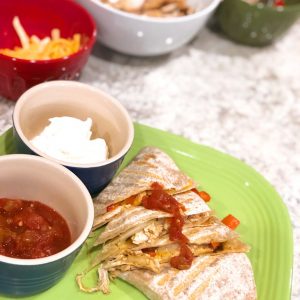